The Fast and the Furious Wiki
Register
Don't have an account?
Sign In
Advertisement
in: Cars, Muscle cars, Furious 7 Cars, Furious 7

A reluctant Roman Pearce drives the 1967 Chevrolet Camaro during the crew's attempt to save the hacker Ramsey from Mose Jakande's armored convoy. Unable to reach the convoy by conventional means, the cars they planned to use in their persuit had been air dropped into the Caucasus Mountains.[1]

Terrified of dropping out of the plane with a simple parachute as support, Roman initally remained behind while the others fell on their marks. However, realizing that Roman would back out at the last second, Tej Parker armed his parachute and the air outside of the plane dragged the Chevrolet out of the plane.

Roman was stranded in the forest with no immediate way of getting back to the others. He was able to aid Dominic Toretto and Ramsey in their attempt to escape Deckard Shaw when he clips his bumper, and forces him down the steep hill away from Dominic and Ramsey. Roman later regroups with the others. 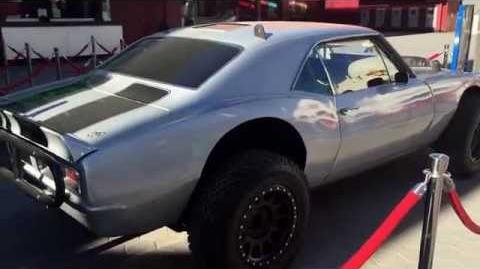