The Fast and the Furious Wiki
Register
Don't have an account?
Sign In
Advertisement
in: Cars, Tokyo Drift, Tokyo Drift Cars, Muscle cars

Racing Takashi in a drift race

The 1967 Ford Mustang Fastback is a major car driven by Sean Boswell in The Fast and the Furious: Tokyo Drift.

The Fast and Furious: Tokyo Drift

A 1967 Ford Mustang Fastback was owned by Major Boswell, who found it on the army base. When Sean woke up one morning, he found his father working on the car, the frame old and half completed. When Sean challenges the Drift King, Takashi to a race through his uncle, Kamata, Sean and his friends work to restore the 1967 Ford Mustang.

Sean uses the Ford Mustang to race Takashi down the mountain he's never been beaten on. Despite several close calls wherein Sean is almost over the edge the road, he is able to win when Takashi's car careens off the edge near the bottom of the mountain and crashes.

The 1967 Ford Mustang Fastbacks used in Tokyo Drift were built using 1968 Ford Mustang models. It took the production team a total of two months to install the Nissan Skyline GT-R engine in the 1967 model.[1]

Additionally, a 430-inch Windsor motor with 9-inch rear end and a spool, was used. The horsepower of the motor was brought closer to "500 horsepower" as a result. Two duplicate Mustangs using the aforementioned motor were built.[1]

Other upgrades include improved brakes, racing seats, seven spoke wheels and a rear roll cage. Extra headlights have been removed so that the front-mount inter cooler can access a sufficient air supply. 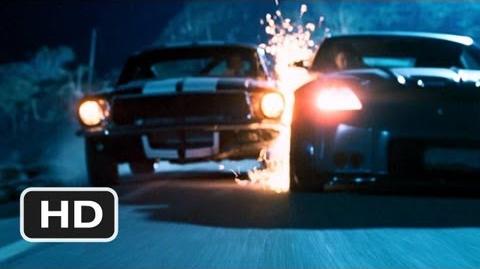 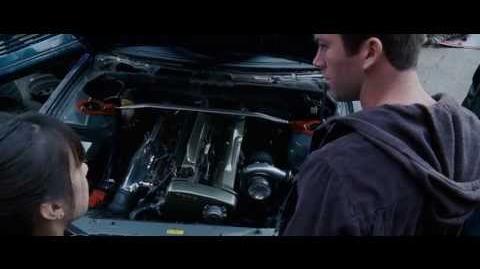 TOKYO DRIFT MUSTANGS - Told by the guy who built them.