"Somebody better do something! I got a tank on my ass!"
―Roman Pearce[src]

The 1969 Ford Mustang Fastback is a major car driven by Roman Pearce in Fast & Furious 6.[1]

"Brian, that Mustang would make a nice anchor."
"Yeah, I'm on it."
―Dominic Toretto and Brian O'Conner[src]

During the pursuit of Owen Shaw and his crew, Rome drives the 1969 Ford Mustang, which was owned by Tej Parker. When Shaw emerges from a transport truck driving a tank, Dominic Toretto's crew works fast to improvise a new plan.

During the chase, Rome attempts slow the tank down by getting in front of it. However, he doesn't anticipate being fired on and hits the breaks to avoid being hit by the tank's shot.

As a result, the Ford Mustang is caught on the front of tank, unable to shake loose. Rome wraps a cable wire around the nose of the tank and jumps onto the Ford Escort MK I when Brian O'Conner comes to get him out danger. The crushed Ford Mustang is later used as an anchor to stop the tank. 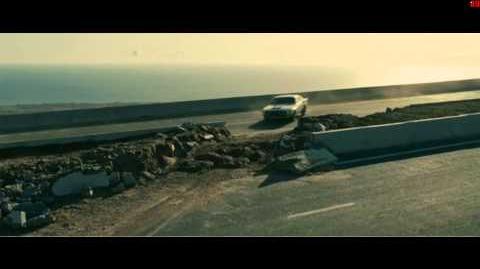