The Fast and the Furious Wiki
Register
Don't have an account?
Sign In
Advertisement
in: Cars, Muscle cars, Furious 7 Cars,
and 4 more

The 1970 Dodge Charger R/T was kept inside the garage of the Toretto House, was built by Dominic and his father in his youth. When his father was killed in a stock race accident by Kenny Linder, Dominic refused to drive the Charger because he was afraid of it.

When Brian O'Conner became integrated into the crew and even began dating Dominic's sister, Mia Toretto, Dominic led him to the garage and showed him the Charger. The car is famed for its incredible power at 900 horsepower and holding a record 1/4 mile time at just nine seconds flat, set by Dom's father at the Los Angeles County Raceway.

When Johnny Tran and Lance Nguyen do a drive by and kill Jesse, a pursuit starts with Brian and Dom chasing after him, Brian driving the Toyota Supra and Dom driving the only car left: the Charger. Dom uses it to knock Lance off his bike and down a hill. When Johnny is killed by Brian, he and Dom meet up at a red light ready to race.

As the light turns green, Dom performs wheelie which shows the raw power of the R/T. Brian must use his nitrous oxide to simply keep up with the Charger. They approach an oncoming train but both drive through the barrier and narrowly miss hitting the train.

After landing, both he and Brian are seen smiling as the race is over, but Dom hits the end of a semi-truck. This sends him and the Charger airborne and then rolling over numerous times. Although Dom survives with minor injuries, the Charger is rendered inoperable, at which point Brian hands over the Supra to Dom, leaving the Charger on the road.

Prior to finding him in the Dominican Republic, Dominic's then-girlfriend, Letty Ortiz, refused to let the Los Angeles police dispose of the car. Instead, she began working on the Dodge Charger herself. She left the Charger incomplete at some point and traveled to Baja, Mexico which eventually led her to the Dominican Republic and Dominic.

Following her return to the United States when Dominic left for Panama, Letty presumably started working on the Dodge Charger until she was recruited by Brian O'Conner to go undercover to discover the identity of Arturo Braga and was presumably later killed by Fenix Calderon.

When Dominic returned to Los Angeles, Mia explained that Letty had been working on the partially restored Charger before her death. After mourning over her death, Dominic finishes rebuilding the car in Letty's stead. When they go to capture Arturo Braga, Dom drives the Charger to Mexico. He uses it to drive behind Brian's Subaru Impreza WRX STi, and they both head towards the tunnel that leads to the U.S.

At one point, Dom is headed down one of the tunnels with explosives at the end. Unable to leave the tunnel, as a Chevrolet Camaro RS-Z28 F-Bomb is blocking him. Dominic jumps out of the Charger and into the Camaro, leaving the Charger to drive headfirst into the explosives. Towards the end of the film, the Charger is revealed again in mint condition with Brian behind the wheel as he, Mia, Tego Leo and Rico Santos proceed to rescue Dominic off of a bus en route to Lompoc Prison.

Brian drives the Charger in front of a prison bus with Dom on board and slams the brakes. The bus crashes into the rear of the Charger, causing it to flip violently across the road. Following Dominic's escape from the bus, Dominic commandeers the Charger and drives Rio de Janeiro.

Luke Hobbs of the Diplomatic Security Service (DSS), after looking at security and traffic cameras, spots the Charger with the faces covered. Facial recognition software manages to identify the driver as Dom and the passenger as a fellow crew member, Han Seoul-Oh. Hobbs realizes that Dominic and Brian's associates are now in Rio as well. The Charger is seen again on the Rio racing scene and was used to win an off-screen pink slip race for a Porsche 996 GT3 RS. The Charger is seen one final time in the movie when it is rammed into by Hobbs armored car.

Dominic's nephew, Jack plays with a scale model of the Dodge Charger. The scale model is an exact replication of the original Charger R/T that Dominic drove in Los Angeles.

When Dominic and the others agree to help Mr. Nobody rescue a hacker named Ramsey from a terrorist named Mose Jakande, a 1970 Dodge Charger R/T is given to him by Mr. Nobody, who allows Dominic to use any of the cars and any equipment in the garage.

Tej Parker uses parts from a military jeep to add more weight and power to the Charger. Dom then uses the Charger to reverse out of the hangar of a plane, falling multiple feet before deploying his parachute. Then it is used to pull the back of the bus off using a roof mounted Grappling Hook Launcher. After rescuing her, he is rammed a few times by Deckard Shaw, who showed up to wipe Dominic out, but Roman Pearce manages to come in as reinforcement. Dom is then surrounded by a group of terrorists as he attempts to escape with Ramsey, and decides to drive down a steep cliff, causing the car to roll over multiple times. Although Dom and Ramsey survive, the car ends up being completely destroyed.

When the crew returns to Los Angeles, Dominic used his Charger to face off against Deckard Shaw. In another game of "chicken", the two crash their cars. 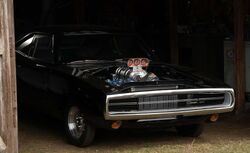 The car is first seen parked in Dom and Letty's garage on their farmland in Thailand. It is later seen where Dom is sitting on the hood of the Charger replaying Mr. Nobody's SOS message where Dom discovers that Jakob was responsible for his plane crash.

The Charger isn't seen again until the end of the movie where it is parked in the garage at 1327 and Little Brian is playing with a model of the Charger with Letty, who has a toy rocket ship.

The Dodge Charger R/T used in The Fast and the Furious featured a false BDS 8-71 Roots-style supercharger with chrome-plated plastic attached to the the hood. Butterflies traditionally do not open or react when the engine of a Dodge Charger R/T is revved. The R/T purported to have 900 horsepower and a rear wheel drive.[1][2]

The original R/T used a hydraulic ram for the burnout-wheelie scene, however, the hemi that appears during the garage reveal sequence, the supercharged Chrysler 426 hemi V8, was not used for action sequences. Instead, an 383ci from Mopart was presumably used in its stead. Additionally, the R/T is thought to have been a 1968 Dodge Charger disguised with 1970s parts[3], such as the nose and mixed trim.[1] Modifications made to the R/T included its use of Nitrous Oxide, Catherine wheels, a stainless still mesh grille and a full roll cage. The R/T uses Rear Wheel Drive and Continental Sport Contact tires that are 18- x 8.0 inches in front and 18 x 8.5 inches in the rear.[4]

For Fast & Furious (and subsequently, Fast Five) Dennis McCarthy and his production team Vehicle Effects, worked to construct a 1970 Dodge Charger R/T that differed from the original from The Fast and the Furious. Six Dodge Chargers were built to perform all of the stunts in the film, however, because of the frequency of Dodge Chargers used in action films, the rarity of second generation Dodge Chargers made them difficult to procure in mint condition.[5]

McCarthy and his production team purchased Dodge Chargers in terrible condition and worked to have them ready for the film. Of the six Dodge Chargers used in the film, one of them was constructed with a "blown 528-cubic-inch Hemi V8". Three others used LS3 GM crate engines for simplifications. Another Charger was merely created for up-close shots with the actors on stage and green screen effect shots for post-production work.[5]

Visible changes to the Dodge Charger's appearance from the first film included the lower supercharger. Instead of sitting atop of the hood of the car, the supercharger sits in a hole in the hood, and more contemporary, large-diameter wheels and tires were added. While one Charger was blown up and another crashed, four have survived and are stored.[5]

The "Off-Road" Dodge Charger R/T was designed with off road capabilities and handle rough terrain. According to Dennis McCarthy, the production team built the Off-Road R/T with a “Pro-2 chassis with a Dodge Charger body on top”. The Off-Road Dodge Charger was built to resemble a car from the original Mad Max films, primarily on account of difficulities finding grills and tail panels for the vehicles.[6]

Eleven Off-Road Chargers were built during the production of Furious 7. Of the eleven, subpar "shells" were used and were often "little more than roof and pillars". Like most cars in the film, the Off-Road R/T was powered using LS motors, however, McCarthy states that Dodge worked with them to use SRT motors as well.[6]

Dom reversing out of the plane

Ramsey on the bullet riddled Charger

Ramsey trying to get inside the Charger

Dom cornered at the Caucasus Mountains

The crew and the destroyed Charger

Dom inside his Charger

Flashback to the train jump 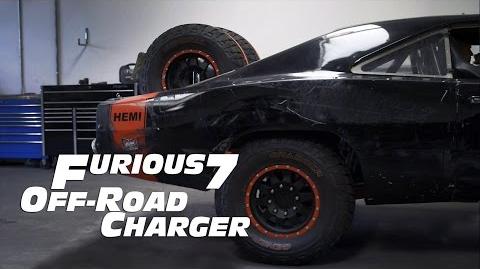 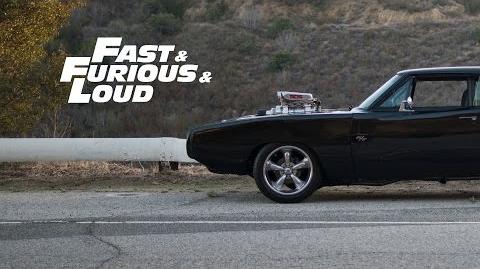 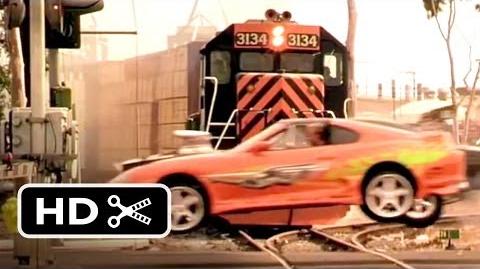