The Fast and the Furious Wiki
Register
Don't have an account?
Sign In
Advertisement
in: Pages with reference errors, Cars, 2 Fast 2 Furious Cars,
and 2 more

Suki drives a Honda S2000 during the race hosted by Tej Parker. During a majority of the race, she remains in last place behind Orange Julius's 1993 Mazda RX-7 despite her best efforts to get ahead of him.[4]

When Tej reveals his surprise for the race is a major jump across a draw bridge, Suki successfully manages to take Orange Julius's lead when he backs out of the race. She makes the bridge jump near the end of the race and returns to the starting line of the race, but the car also suffers minor cosmetic and radiator damage.[4]

When Monica Fuentes signals the U.S. Customs agents to besiege the street racers, Suki and the other racers then escape the finish line when the cops arrive. Suki's S2000 is later used during the car scramble by her friends while Suki drives the Mitsubishi Eclipse to distract the cops so Brian and Roman can escape undetected in the muscle cars they won earlier.[4]

Suki's S2000 has a custom set of pink vinyls and a bottle of Nitrous behind the seats. Its engine is a 2-liter aluminum-alloy DOHC F20C1 inline 4 with a Comptech supercharger. It also features a Paxton Novi 1000 Toucan Industries exhaust with a non-functioning Ractive chrome tip. Appearance mods include a VeilSide Millennium body kit, Motegi Racing 18" rims, and airbrushed artwork done by Noah of Noah Fine Art.

On September 15, 2020, famous YouTuber Doug DeMuro reviewed the S2000 at the Peterson Automotive Museum, where he revealed that several panels had overspray from its rushed paint job, the neon lights were hot-glued on several areas, the seats and interior trim were made of bath mats, and the seat belts had been deleted. In addition, the trunk was gutted out, with the gas tank replaced with a fuel cell.[5] 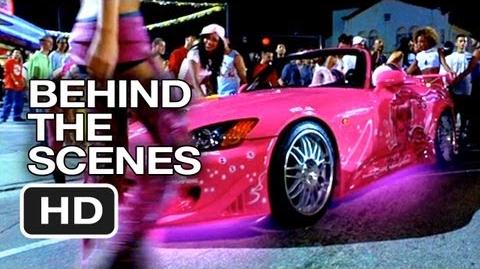 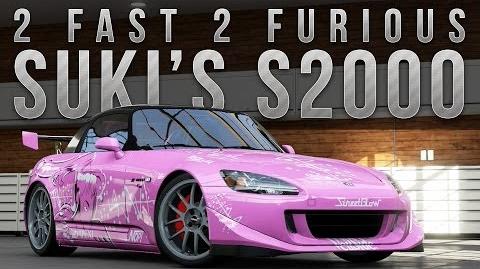 The Honda S2000 before the race

Pink neon lights on the underbelly of the car