The Supra is driven by Han during Activation of Project Aries. After Dom and Letty take out Jakob and Otto's follow cars, Han and Mia arrive in the modified Supra and Mia activates the magnet, attaching the car to Otto's henchmen's STC Delta Didgori and forcing one of his henchmen to be held back because of his armour.

When Otto turns on Jakob and Dom saves him by pushing a car underneath him, Jakob climbs across the Delta Didgori and gets into the Supra. After detaching himself from the magnet he drives off in the Supra but soon returns when he hears Dom needs help. Together with Dom, they both activate their magnets and attach themselves to the side of the front of Otto's 18-wheeler. They force the 18-wheeler to flip over and Jakob just barely escapes before the Supra is crushed and destroyed. 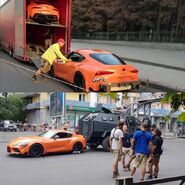 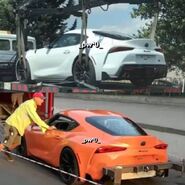 Trivia and Behind the Scenes