View source
watch 01:40
Boba Fett Returns - The Loop
Do you like this video?
Play Sound

The Fast and the Furious
2 Fast 2 Furious

"Nice car. What's the retail on one of those?"
"More than you can afford, pal. Ferrari."
―Brian O'Conner and Ferrari Driver

During Brian O'Conner and Dominic Toretto's test drive of the refurbished Toyota Supra MK IV, the two encounter a man driving the F355 Ferrari waiting at the stoplight. When Brian compliments the driver's car, he asked how much the retail for the car ran. The man responded that the car was a Ferrari and more than Brian could afford.

He goaded the two into a drag race, to which Dominic encouraged Brian to oblige. When the race begins, the Ferrari's driver is able to keep up with Brian's Supra for a time before Brian pulled ahead and left him behind. After the race, Brian and Dom stopped over at Neptune's Net , where they had lunch.

Carter Verone owns a blue Ferrari F355 convertible in his mansion, though the vehicle itself isn't used. 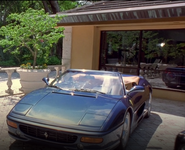