"IMPORTANT: Hobbs & Shaw uses Creative Commons Licensed content from Wikipedia (view authors)." Information can be remixed or replaced at any time in future edits to better suit the MOS of the The Fast and the Furious Wiki.

In London, Hattie Shaw and her team of MI6 agents attempt to retrieve a programmable supervirus dubbed "Snowflake" from terrorist organization Eteon. Brixton Lore, an Eteon operative with cybernetic implants that allow him to perform superhuman feats, arrives and kills all the agents except Hattie, who injects Snowflake into herself before escaping. Brixton frames Hattie for killing her team and stealing Snowflake, forcing her to go on the run.

Luke Hobbs and Deckard Shaw are both informed of the missing virus and are reluctantly assigned to work together to track it down. After a brief meeting at a CIA black site at Leadenhall Building, Deckard goes to Hattie's house for information, while Hobbs manages to find Hattie; after a brief scuffle, he brings her to the CIA office, as Deckard then returns. The office is attacked, and Hattie, whom Deckard reveals is his sister, is taken by Brixton, whom Deckard recognizes as an old colleague-turned-enemy he'd previously shot and supposedly killed. Hobbs and Deckard pursue and rescue Hattie during an ensuing car chase, managing to escape from Brixton, who crashes into a double-decker bus. However, Brixton frames all three as traitors via Eteon's control of global news media.

The three locate Professor Andreiko, who created Snowflake to efficiently deliver vaccines, who informs them that to prevent Eteon from using Snowflake to eradicate humanity, Hattie, while the virus is still dormant, must either be cremated or have the virus removed with a specialized extraction device, located in an Eteon facility in Chernobyl, Ukraine. After flying undercover to Moscow and rendezvousing with Deckard's old friend, Margarita to rearm, the three infiltrate the facility. They manage to retrieve the extraction device before escaping and destroying the facility; however, Andreiko is killed, and the device is damaged during their escape.

Hobbs takes the trio to his childhood home in Samoa to visit his estranged brother Jonah, a talented mechanic, to repair the device and lay low before confronting Brixton again. Hobbs has a tense reunion with his family, but Jonah is eventually persuaded to help them by their mother. The makeshift battalion prepares for Eteon's arrival, setting up a variety of traps around the island. Jonah successfully repairs the device and starts the virus extraction, just as Brixton and his army arrive. In the ensuing battle, all of Brixton's soldiers are defeated. Brixton retakes Hattie via helicopter; however, Hobbs, Deckard, and the Samoans bring the aircraft down. Working together, Hobbs and Deckard defeat Brixton, who is remotely terminated afterward by Eteon's never-seen director. The director send a message claiming to know Hobbs and intending to persuade him and the Shaw siblings, while they promise to find the director. The group celebrates their victory.

In mid and post-credits scenes, Hobbs brings his daughter to meet their extended family in Samoa; Deckard and Hattie are implied to bust their mother out of prison; and Hobbs receives a call from his partner, Victor Locke, informing him that he had broken into a facility and discovered another virus worse than the Snowflake virus.

Hobbs also secretly has the London police set on Deckard in retaliation for a prank during the trip to Moscow.

Vin Diesel announced that a spin-off film to the Fast and Furious was in development during an interview with Variety.[2][3] Universal Pictures then announced that the spin-off film would center around the characters of Luke Hobbs and Deckard Shaw with a release date set for July 26, 2019.[4] Variety also reported that Shane Black was in the running to direct the film, with Chris Morgan writing the script.[5] The spin-off's announcement led to a response from Tyrese Gibson. Posting on Instagram, Gibson criticized Johnson for causing the filming of the ninth entry in the Fast & Furious series to be delayed for another year.[4]

Dwayne Johnson posted a video on Instagram, showing off the finished script for the film, revealing the title as Hobbs & Shaw. David Leitch was reported to be in talks to direct the film in February 2018, and his involvement in the film was confirmed in April.[6] In March 2018, it was reported that production on the film would begin in September 2018.[7]

In November 2018, Eiza Gonzalez joined the cast of the film.[11] In January 2019, Johnson revealed that his cousin Roman Reigns would appear in the film as Hobbs' brother.[12]

The following list of major vehicles used in "Hobbs & Shaw". 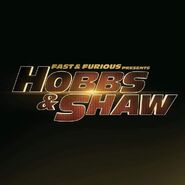 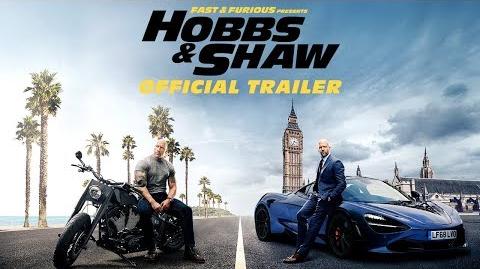