The Fast and the Furious Wiki
Register
Don't have an account?
Sign In
Advertisement
in: Unsourced quotes, Fast & Furious 6 Characters, Furious 7 Characters,
and 2 more

Jack is the son of Mia Toretto and Brian O'Conner, the nephew of Dominic Toretto, Letty Ortiz, and Jakob Toretto, the older brother of Mia and Brian's daughter, and the cousin of Brian Marcos.

Some time after Mia and Brian reconciled, they conceived Jack, but Mia kept her pregnancy a secret from both her brother and Brian during that time. Mia throws up in Rosa and Vince's house after helping put Nico to bed, and Rosa asks if Brian knows she's pregnant.[2]

Later, after escaping from Luke Hobbs, Mia admits to her pregnancy when Dominic and Brian suggest that they split up. Mia states that she already lost her family once and doesn't wish to lose them again. They decide to stick together, and Dominic is elated that their family is expanding.[2]

Some time after the team escapes with Hernan Reyes's money, Mia, Brian and Dominic relocate to the Canary Islands in Spain. Mia is visibly pregnant with Jack as she walks with Brian across the beach.[2]

Brian and Dominic race to the church where Mia is giving birth to her son. Dominic tells Brian that the moment he steps through those doors to be with Mia, his old life is done. A considerable time later, Brian and Mia are sitting outside on their lawn with Jack, Brian giving Jack a die cast model replica of his blue Nissan Skyline GT-R R34, while Dominic gives Jack a model of his 1970 Dodge Charger R/T. After his playtime, Mia takes Jack in for a nap.[3]

When Luke Hobbs presents evidence of Letty Ortiz's survival, Dominic and Brian decide to go to London to get her back. Mia remains behind with her son, with Elena Neves acting as her protection in Dominic and Brian's absence.[3]

When Owen Shaw is apprehended, his backup plan was to have Mia and Jack kidnapped by Vegh and Klaus. However, Mia gave Elena her son and was kidnapped alone instead. Dominic and the others allow Owen to leave with Riley Hicks, his lover and double agent, before going to save Jack's mother. In the aftermath, Jack is taken back to Los Angeles to live in the Toretto House with his family.[3]

Jack is now attending pre-school. Brian, struggling to adjust to normal life, drives his son to pre-school in his blue Chrysler Town & Country. When one of the staff notices Brian's difficulties, she helps him open the side door and takes Jack out of his seat so he can attend school.[1]

Later, Jack is escorted from the house by Brian and situated in his booster car seat, presumably on his way to pre-school again. When he throws one of his model cars onto their driveway, Brian tells him that "cars don't fly", something he repeats in amusement.[1]

However, a bomb disguised as a package sent to the house by Deckard Shaw, detonates. Brian shuts the side passenger door to protect Jack, and Mia, fearing for her son's life, rushes over to them.[1]

Although the window of the car is cracked due to Brian's face being slammed to it, Jack is safe from harm. Mia, Jack and Brian relocate to the Dominican Republic for protection while Dominic goes to speak with Luke Hobbs, who was injured by Deckard Shaw. When Brian leaves to accompany Dominic and the others to take down the Deckard, Mia and Jack remain behind in the Dominican Republic. Following Shaw's arrest, Brian finally retires; he, Dominic and the crew, along with Mia and Jack, decide to spend the day at the beach, with Brian playing with Jack and Mia on the beach.

A photo of Jack with his parents is found by Letty Ortiz in the glove compartment of Dom's 1970 Chevrolet Chevelle SS.

Mia while pregnant with Jack in Fast Five 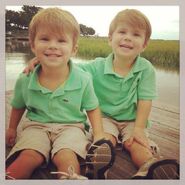 Charlie and Miller Kimsey on the set of Furious 7