The Fast and the Furious Wiki
Register
Don't have an account?
Sign In
Advertisement
in: Characters, Fast & Furious 6 Characters, Deceased,
and 3 more

"We got a problem, guys. We got a picture of her with the guy who almost took you out."
―Klaus[src]

Klaus was a member of Owen Shaw's Team who appeared to act as an assassin and muscle for Owen Shaw.

Klaus was presumably a member of Shaw's team when he attacked a major military convoy in Berlin, Germany in 2010[1], during Letty Ortiz's earliest tenure as a recent addition to the team. Two years later, Klaus and the other members of Shaw's team worked together to collect a series of major military and government components to create a Nightshade device that could take out the power grid of an entire country. Shaw's intention was to sell the Nightshade device to the highest bidder.[2]

In London, Klaus and the rest of the team attacked Interpol headquarters where a list of locations to where the final competent for the Nightshade device could be located on several military bases. When Brian O'Conner, Han Seoul-Oh and Gisele Yashar arrived at Interpol, they were fired upon by Adolfson, sniping their cars from above, and Klaus, who provided cover for Jah and Denlinger as they exited the Interpol headquarters. When Vegh arrived in her ramp car, she led Jah, Denlinger and Klaus away from Interpol.[2]

Klaus, Jah, and Denlinger were pursued by Brian, Roman Pearce and Tej Parker. Klaus and Denlinger made short work of Tej and Roman's BMW M5's, using electronic devices that scrambled the chips in the car's engine and crashing them. Klaus was unable to disable Brian's BMW because he was able to remove the device on his car. Klaus and others met up with Shaw at the rendezvous point and headed into the tunnel. When Brian attempted to run them of the road, Jah requested the help of Vegh. In her ramp car, Vegh was able to crash Brian's car when Jah veered the car to the right and away from Brian.[2]

Klaus and the team grow suspicious of Letty when they learn that she is connected to Dominic Toretto, though she denies ever knowing him on account of her amnesia. When Shaw and his team relocate to Spain, Vegh and Klaus head for Dominic's house in the Canary Islands to kidnap Mia Toretto. Mia and Elena Neves are able to escape immediate detection. However at the last moment, Mia gives Elena her son, Jack and uses herself as a distraction. Vegh and Klaus catch her and board a plane back to the NATO military base where Shaw is waiting for them.[2]

When Shaw and Riley Hicks board the plane, Vegh and Klaus bring her forward so she can be killed. However, their plans are derailed when Dominic Letty and Brian board the plane and run Hicks over with a Dodge Charger. Klaus attacks Brian when he tries to go after Vegh. The two fight for a time before Brian is able to break away and attack Shaw. When Brian is about to be attacked by Shaw, Dominic is able to headbutt Klaus, which knocks him off balance and into Shaw. When Mia and Brian escape the plane, Hobbs is able to board the plane from its underbelly and aids Dominic in the fight against Shaw and Klaus. Dominic and Hobbs are able to knock Klaus off in a team effort. Klaus is killed when the plane crashes and explodes.

"We got a white Hobbs."
―Roman Pearce[src] 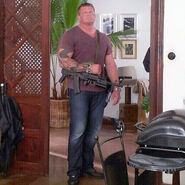