Johnny Strong
Leon is a former member of Dominic Toretto's Crew. A supporting character in The Fast and the Furious, Leon acted as a lookout during street races and participated in a string of truck hijacks organized by Dominic Toretto.

Not much is known about Leon's background. His mother taught him how to drive shortly before she abandoned him.[note 1][1] Later on, Leon met Jesse and the two of them eventually befriended Dominic and Mia Toretto, the latter of whom described the pair "just showed up one day and never left".

Leon was one of four members in Dominic's crew that participated in highway theft of major electronics from trucks. They robbed trucks in the span of four months before the LAPD and the FBI's joint task force placed Brian O'Conner undercover to investigate Toretto's activities.[1]

Three weeks into Brian's undercover stint, Leon and the others begin to acknowledge Brian's habitual visits to the Toretto's Market & Cafe. When Vince instigates a fight between himself and Brian, Leon and Jesse attempt to break up the fight before finally Dominic intervenes.[1]

Later that night during the street race, Leon kept an eye on police activity and chatter, acting as an early warning for police presence. He keeps watch in his 1995 Nissan Skyline GT-R R33. Following Dominic's victory in the race, Leon warns the participants and spectators of the race of the police's arrival and retreats to the Torretto House. Leon and the others are reprimanded by Dominic, who avoided arrest with the help of Brian, who felt he was abandoned by his crew.[1]

In light of Dominic and Mia's obvious appreciation of Brian's help, Leon, Jesse and Vince display their distrust of the undercover cop by making fun of him. Eventually, however, Leon and Jesse come to appreciate Brian's presence and gradually accept him into their fold. On the day of the Race Wars, Leon attempts to encourage Jesse moments before his quarter mile race with Johnny Tran.[1]

When Jesse loses and flees the race, Leon defends Dominic against Tran's accusations of selling him out to the LAPD. Suspecting that the police were on to them, Leon, Letty Ortiz and Vince attempted to dissuade Dominic from taking on another heist so soon. Dominic objects and they proceed with the plan.

During their attempted hijack of the truck, Vince is wounded and accidentally bound the truck by the tensile wire used in the harpoon he used to climb aboard. Leon is unable to help Dominic reach Vince. He later falls back to help Letty, who is forced off the road and crashes into a ditch. Leon recovers Letty from her car and later picks up Dominic, whose car was damaged in the process of trying to save Vince.[1]

After Brian and Mia are able to free Vince from the truck, Dominic asks Leon to watch Letty. After Vince is airlifted to the hospital for his wounds, Letty and Leon separate from the Torettos. When Brian inquires about the whereabouts of Leon and Letty, Dominic tells him that they're "long gone".[1] 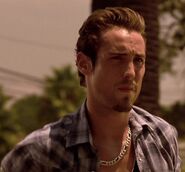