The Lykan HyperSport was featured in Furious 7 as a super car belonging to an Abu Dhabi billionaire prince, which contained a computer chip housing the God's Eye program.

In an effort to retrieve the chip, the crew got themselves invited to a party in the Etihad Towers while Brian and Dom attempted to find the chip, Dom lifting the car up from the front (since the engine was in the back) and Brian trying to remove the chip from the bottom. When Brian couldn't remove it with their time running out, Dom decided to drive the car through the building, with Brian attempting to remove the chip in the passenger seat.

The arrival of Deckard Shaw promptly ended the party. While Brian retrieved the chip, Dom temporarily incapacitated Shaw by hitting him with the car, only to find the only way out was blocked. Dom then decided to drive the car out the penthouse window (Brian adding "cars don't fly!", an allusion to what he told his son Jack earlier) yet the car drives through the window of another building and then drives out the window on the opposite end, only to crash again through the window of a third building, this one holding a terracotta convention. Dom is unable to stop the car because there is an unknown problem with the brakes. The car plows through the statues and Dom and Brian bail out of the car as it goes through the final glass window, plummeting hundreds of feet before being destroyed upon impact as it lands on the concrete ground below. 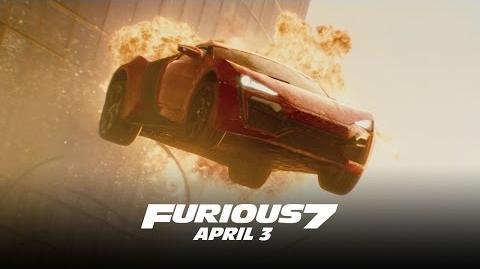 Add a photo to this gallery

Retrieved from "https://fastandfurious.fandom.com/wiki/Lykan_HyperSport?oldid=35541"
Community content is available under CC-BY-SA unless otherwise noted.