The Fast and the Furious: Tokyo Drift is a 2006 film directed by Justin Lin and the third installment of The Fast and the Furious film franchise. Tokyo Drift star Lucas Black, Bow Wow, Brian Tee and Sung Kang. Written by Chris Morgan, Tokyo Drift was the first in the franchise with no central narrative or character connection to the previous two films at its forefront and relocates the setting from the United States to Tokyo, Japan. Tokyo Drift is the first of four films in directed by Justin Lin[note 2] and the first of five films written by Chris Morgan (who would become the franchise's primary screenwriter). The film was released June 4, 2006 and grossed $158.5 million at the Box Office.[2]

When troublemaker Sean Boswell is the choice of going to prison or leaving the United States for Tokyo, Japan, he chooses the latter. On the other side of the world, he inadvertently discovers the world of drift racing, a major phenomena in Japan, when he challenges the "Drift King", Takashi to race and lands in the debt of one of his business partners, Han Seoul-Oh, who is looking for someone outside Takashi's influence to trust.

Neal H. Moritz, who had produced the two previous installments, began working on the film in 2005. On June 8, 2005, Moritz hired Justin Lin to direct The Fast and the Furious: Tokyo Drift.[5] Lin, who wasn't intimately familiar with drifting when he was approached to helm the project, recalled: "I was in film school when The Fast and the Furious came out, and I saw it along with a sold-out crowd who just ate it up. What really excited me about directing this film was the chance to harness that energy—create a whole new chapter and up the ante by bringing something new to the table for the audience who loves action and speed."[4] Vin Diesel agreed to make his cameo in the film in exchange for Universal's ownership to rights of the The Chronicles of Riddick franchise and character, in lieu of financial payment.[6]

The RB26DETT motor found in the Nissan Skyline GTR, which powered the Mustang in the film, has been subject to much criticism by automotive enthusiasts. The criticism grew when it was revealed that the car itself barely had any screen time, and regular stunt Mustangs used for the drifting scenes were powered by 351cid Windsor V8 engines.[7] Hot Rod Magazine lamented the possibility that tuners might swap in Japanese motors into American cars.[7] According to SCC, one Mustang received the RB26 swap, while five other Mustangs were created for drifting purposes of which two were destroyed in the process.[8] In addition, the RB26 Mustang was shown to be faster than its V8 powered kin, with times of 0-60 in 5.38 seconds, and the quarter mile in 13.36 seconds at 109.83 MPH.[9]

The S15 Silvia which Black's character trashes in his first race in Japan is depicted as having an RB26DETT engine swap which itself is donated to the Mustang. However, the car used was actually powered by the S15's base SR20DE engine.[10] The Veilside Fortune body-kitted RX-7 driven by Sung Kang's character was originally built by Veilside for the 2005 Tokyo Auto Salon but was later bought by Universal and repainted (the original was dark red, not orange and black like in the film).[11]

SCC tested the cars of the film, and noted that the cars in Tokyo Drift were slightly faster in an acceleration match up with the cars from 2 Fast 2 Furious.[12]

Notable drifting personalities Keiichi Tsuchiya, Rhys Millen, and Samuel Hubinette were consulted and employed by the movie to provide and execute the drifting and driving stunts in the film.[13]Tanner Foust, Rich Rutherford, Calvin Wan, and Alex Pfeiffer were also brought in when it was revealed that none of Universal's own stunt drivers could drift.[14]Some racing events were filmed within the Hawthorne Mall parking lot in Los Angeles. [15]

Toshi Hayama was also brought in to keep elements of the film portrayed correctly after being contacted by Roger Fan, an old high school friend that starred in Justin Lin's Better Luck Tomorrow, the organizers of the Japanese series, and his former boss at A'PEXi. Among them are keeping certain references in check (the usage of nitrous oxide in straights but not in turns, keeping the usage of references from sponsors to a minimum, etc.).[16] Hayama also claims that a prop car was "stolen" by some of the action stars and taken for an impromptu "Drift Session" and never returned by the stars.[14]

Main article: The Fast and the Furious: Tokyo Drift (soundtrack)

The Fast and the Furious: Tokyo Drift (score) 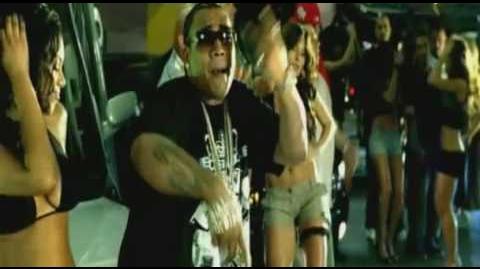 The Fast and the Furious: Tokyo Drift (DVD)

Despite mixed reviews, Tokyo Drift brought in over $24 million on its opening weekend. The movie itself was in limited release in Japan (released under the name Wild Speed 3). As of January 28, 2007, the domestic box office take has totaled $62,514,415 with another $95,886,987 from the foreign box office, resulting in total receipts of $158,401,402.[17] Tokyo Drift did, however, gross lower than its predecessor films.

The film holds a rating of 34% on Rotten Tomatoes[18] and a score of 46 out of 100 on Metacritic[19]. Roger Ebert of the Chicago Sun-Times praised the film, giving it three stars (out of four), saying that director Justin Lin "takes an established franchise and makes it surprisingly fresh and intriguing," adding that Tokyo Drift is "more observant than we expect" and that "the story [is] about something more than fast cars."[20] Michael Sragow of the Baltimore Sun felt that "the opening half-hour may prove to be a disreputable classic of pedal-to-the-metal filmmaking."[21] Kirk Honeycutt of The Hollywood Reporter said that "it's not much of a movie, but a hell of a ride."[22]

Michael Medved gave Tokyo Drift one and a half stars (out of four) saying: "There’s no discernible plot [...] or emotion or humor."[23] James Berardinelli from Reel Views also gave it one and a half stars out of four, saying: "I expect a racing film to be derivative. That goes with the territory. No one is seeing a Fast and the Furious movie for the plot. When it comes to eye candy, the film is on solid ground—it offers plenty of babes and cars (with the latter being more lovingly photographed than the former). However, it is unacceptable that the movie's action scenes (races and chases) are boring and incoherent. If the movie can't deliver on its most important asset, what's the point?"[24]

Richard Roeper strongly criticized of the film, saying: "The whole thing is preposterous. The acting is so awful, some of the worst performances I’ve seen in a long, long time."[25] Similarly, Peter Travers of Rolling Stone said that Tokyo Drift "suffers from blurred vision, motor drag and a plot that's running on fumes. Look out for a star cameo—it’s the only surprise you'll get from this heap."[26] Mick LaSalle of the San Francisco Chronicle said: "[The main character] has no plan and no direction, just a blind desire to smash up automobiles and steal a mobster's girlfriend. [...] As for the racing scenes, who cares about the finesse move of drifting, compared to going fast? And who wants to watch guys race in a parking lot? For that matter, who wants to watch guys race down a mountain, with lots of turns?"[27] 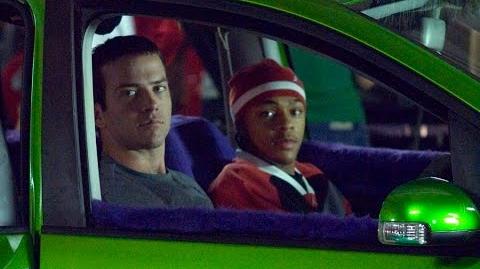 The Fast And The Furious Tokyo Drift - Trailer (HD) 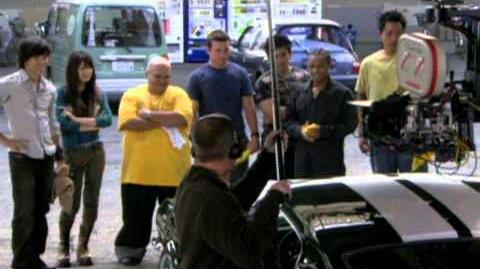 The Fast And The Furious Tokyo Drift Behind The Scenes 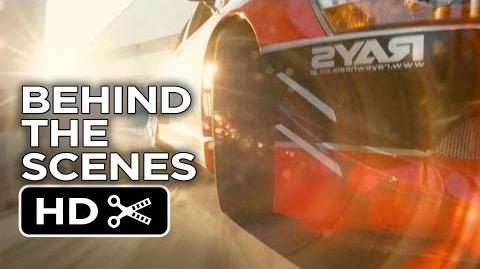 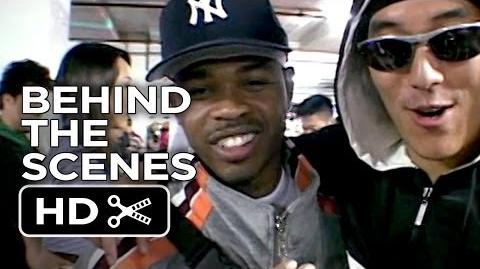 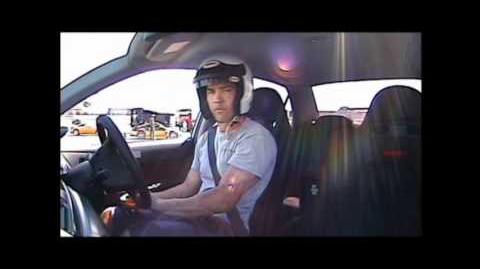 The Fast and The Furious Tokyo Drift - Drift School 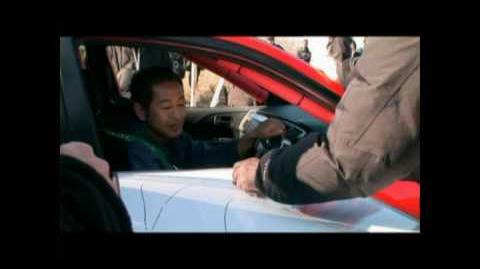 Fast and the Furious Toyko Drift The Real Drift King 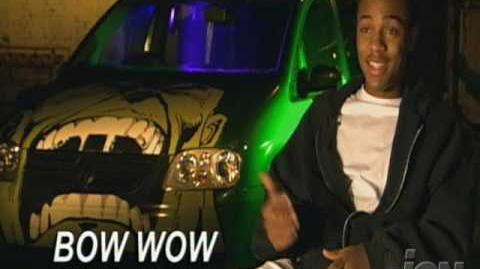 FAST AND FURIOUS TOKYO DRIFT - BEHIND THE SCENES 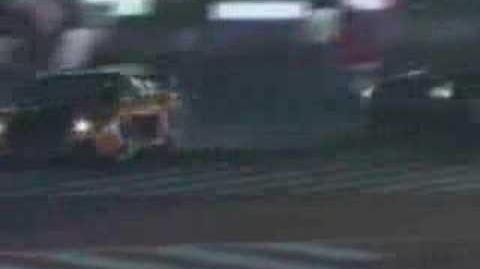 Tokyo Drift - Behind the Scenes with Fifth Gear 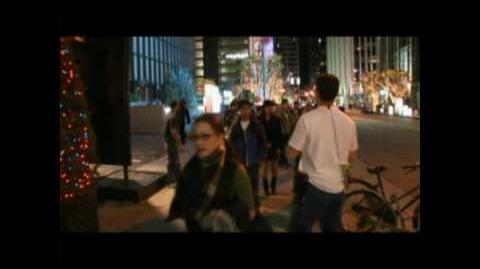 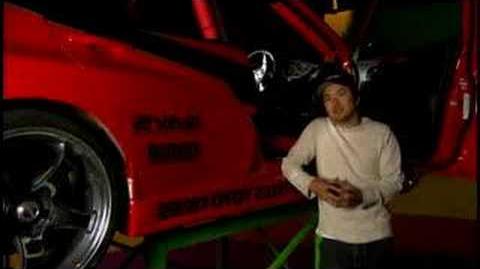 Tokyo Drift Behind The Scenes
Add a photo to this gallery

Retrieved from "https://fastandfurious.fandom.com/wiki/The_Fast_and_the_Furious:_Tokyo_Drift?oldid=40429"
Community content is available under CC-BY-SA unless otherwise noted.