This article (The Fast and the Furious (2004 video game)), or a section of this article, does not meet wiki standards. Please repair this article so that it meets our standard. Please see the talk page for more info.. 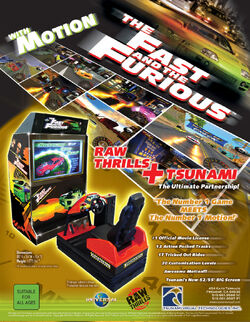 The Fast and the Furious is an arcade game based on the first film of the franchise. However, the vehicles used in 2Fast 2Furious are featured in the game as well. It was developed and published by Raw Thrills. They can be viewed as a spiritual successor to the Cruis'n series, as they contain many similar elements and were both designed by Eugene Jarvis. The original arcade game was even ported to the Wii under the name Cruis'n, with all elements of the film license removed.

Retrieved from "https://fastandfurious.fandom.com/wiki/The_Fast_and_the_Furious_(2004_video_game)?oldid=31700"
Community content is available under CC-BY-SA unless otherwise noted.